Is crypto a secure exchange vehicle? GOLDCOIN (GLC) certainly is.

The recent jump in the value of Bitcoin to well over $10,000 has provoked a lot of noise in the traditional business press about the “volatility of cryptocurrencies.” With coin collectors piling funds into them, asset managers are getting nervous. If crypto-currencies are successful, it has to be a “bubble,” it can’t possibly be because of the value and security they offer.

The example of GOLDCOIN (GLC) shows that there’s no bubble in store. GOLDCOIN (GLC) has steadily increased in value over the past three years, to reach a high of $0.20 at the end of November 2017. This is the result of steady and increasing investor interest in the crypto-currency. GOLDCOIN (GLC) attracts investors because it offers security and value.

What is really happening is that institutional traders are following venture capitalists into the crypto space “with massive demand,” according to hedge fund manager Ari Paul of BlockTower Capital, with $50 million in assets under management, in an interview.

Ari Paul compares wealth building in crypto-currencies to offshore banking – both offer exceptional security, he points out. “Apple, Amazon, every billionaire on the planet, has wealth stored offshore. And firms like JPMorgan collect fees to offshore law-abiding citizens’ wealth. People want to store their wealth securely, in a way that no single judge could freeze all of their assets. So cryptocurrency performs that same task of the offshore banking, of keeping wealth secure, only it’s an order of magnitude better.” 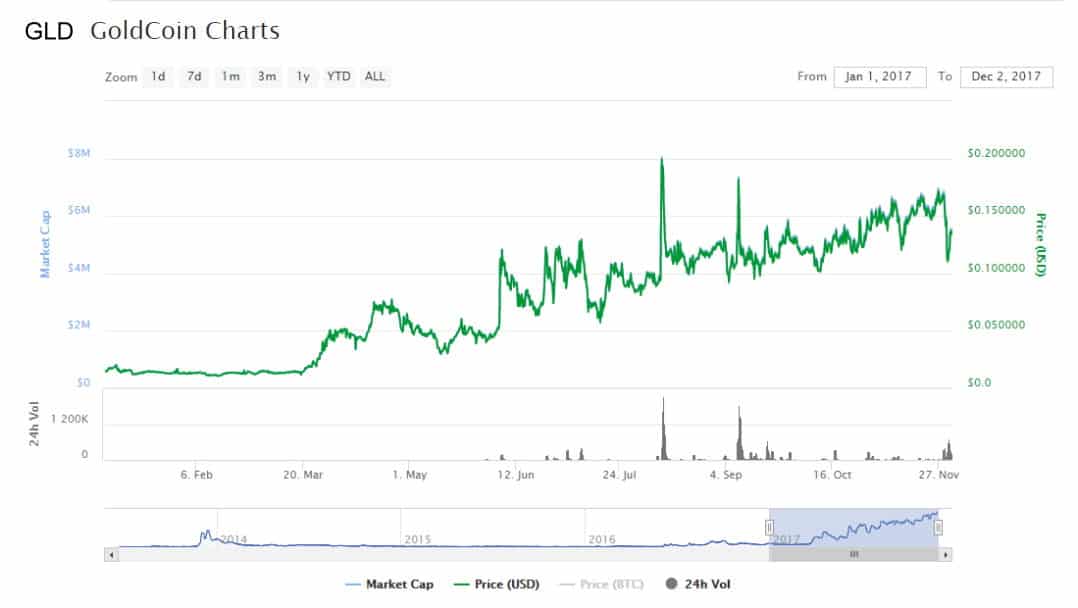 “Now both retail and institutional traders have begun to take crypto-currencies seriously, and the result is that we are seeing our adoption rate skyrocket,” comments Matthews.

Traders have confidence in GOLDCOIN, it has stayed on the path pioneered by Satoshi Nakamoto when he or she first created Bitcoin. That initial vision, as outlined in the original white paper published in 2008, is the basis of GOLDCOIN (GLC)

“Security is ensured by keeping the fundamentals of blockchain and ledger as they should be,” Matthews continues. “We don’t do SegWit for example, (Segregated Witness, which would indirectly increase a block’s capacity to store more transactions than originally intended by Bitcoin’s founders).  We still have the original tiny transaction fee that originally was charged by Bitcoin – now it is much larger. We have the living, breathing currency that Satoshi Nakamoto  originally intended to create.”

And the GOLDCOIN (GLC) network has been upgraded to provide better response than that of the original Bitcoin, Matthews notes. It also has reinforced security to guard against 51% and ASIC attacks.

GOLDCOIN will shortly consolidate its success: The GOLDCOIN (GLC) roadshow will kick off in the Spring 0f 2018 with a Conference Tour that will allow the team to showcase the cryptocurrency’s technology and new software to the industry all over the world.

“Goldcoin has a brand that means “value” to billions of people around the globe.

Once consumers discover that Goldcoin is stronger, faster, and cheaper, they will prefer it over Bitcoin. So someone interested in wealth building might speculate that once consumers discover it, its price will rise. In various polls we’ve conducted, consumers prefer the name Goldcoin over most of the other top coins,” Matthews concludes.