Bitcoin, the number one cryptocurrency, is down by 20.47% in the last 24-hour period, according to CoinMarketCap. The flagship cryptocurrency is now trading at $9,561 as what analysts are calling a “cryptocurrency bloodbath” keeps hitting the markets. Most top cryptocurrencies, including Ripple, Ethereum, Bitcoin Cash, Cardano, and Litecoin are down by double digits.

The cryptocurrency market cap even fell below $500 billion, as nearly $300 billion exited the markets in only a couple of days. While some are trying to keep a positive attitude towards the crash, others sold whichever cryptocurrency they owned to cut their losses short.

At the end of the day, one must ask: what is going on? The answer may not be clear. As ShapeShift CEO Erik Voorhees put it, a string of individuals events might’ve triggered the crash. 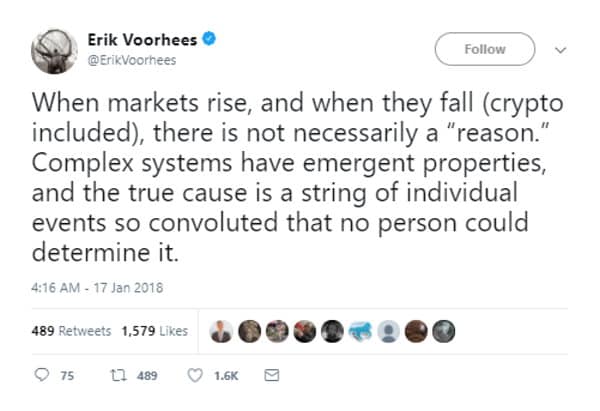 Speaking to Business Insider, City Index’s Simon Revington put things into perspective, stating that although the bitcoin market has fallen year-to-date, it’s still 1,100% above what it was 12 months ago. Per his analysis, however, we could also be looking at an important loss of momentum, as the cryptocurrency hasnt traded above $15,000 for days, and now fell below the $10,000 psychological level.

Some have pointed out various factors behind the bearish move. Recently, both China and South Korea have taken a harsher stance against cryptocurrencies. China is reportedly planning on blocking residents from accessing foreign exchanges, while South Korea’s military has blocked soldiers from accessing bitcoin exchanges while on duty.

Moreover, as Reddit users put it, the market crash is also derived from the Lunar New Year. Asian markets currently dominate the cryptocurrency ecosystem, and as part of the celebration, thousands of traders likely withdrew some of their funds to pay for presents, to travel, and to enjoy themselves. In fact, the ecosystem has witnessed a similar mid-January crash on a yearly basis, adding to this motive.

The rest of the market crash was likely derived from fear, as traders attempted to cut their losses short when they saw the candles turn red.

When will the market recover?

If we take into account that the $10,000 psychological barrier has been broken, we believe two different things may now happen. One is the market going further south as those who thought it would recover quickly start selling as well. The other involves whales waiting for the dip to go low enough to start buying so they can, later on, make a profit.

Taking a look at Bitcoin’s chart on the Bitstamp exchange, we can see the market is now entering the oversold territory, and that the Stochastic indicator makes a case for a bounce. This may, in fact, be the right time to buy bitcoin and other cryptocurrencies, as they may never again be this cheap. 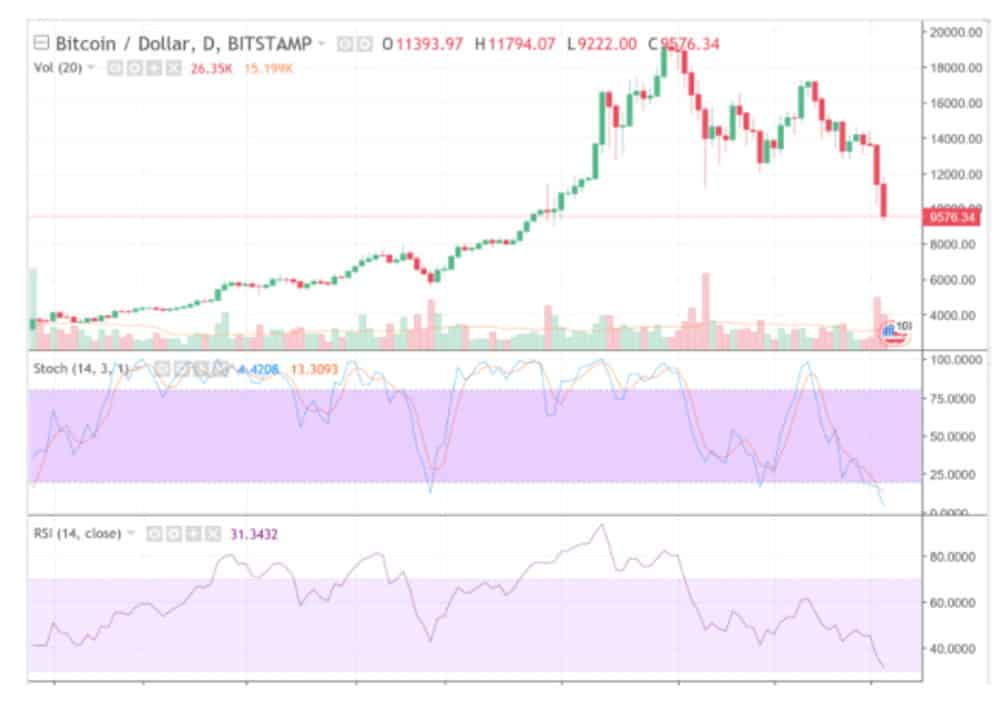 This is how a free market works, it creates bubbles and sorts them out by itself. Those who don’t trade with fundamentals in mind end up losing money when they sell during these heavy corrections. 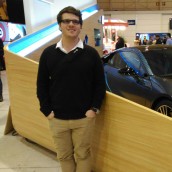