As anyone who’s ever voted for a losing political candidate knows, “majority rules” doesn’t always produce the results you might prefer. In the realm of cryptocurrency, this can have unintended effects with dire consequences.

There are multiple acceptable solutions to each block’s cryptography math problem. Blockchains are designed to accept only one solution and incorporate it as the building block for the remainder of the chain, but what happens if you and another miner publish different solutions at the nearly the same time?

The answer lies in achieving a majority consensus. If the blockchain splits into two competing chains based on different solutions, individual miners can try to solve the new problems associated with each new block. If all else is equal, and more miners are using one of the solutions, then that problem is more likely to get solved first, which would add a new block to that version of the chain. When one of two competing chains grows longer, it becomes the official chain, and miners automatically switch because it’s the longest.

What Happens with Competing Blockchains? 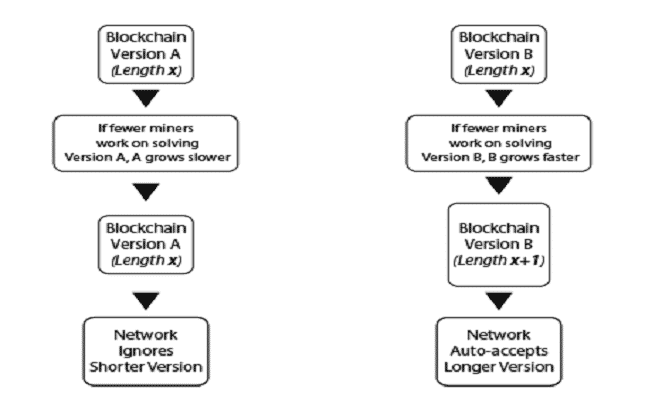 “Nodes always consider the longest chain to be the correct one and will keep working on extending it. If two nodes broadcast different versions of the next block simultaneously, some nodes may receive one or the other first. In that case, they work on the first one they received, but save the other branch in case it becomes longer. The tie will be broken when the next proof-of-work is found and one branch becomes longer; the nodes that were working on the other branch will then switch to the longer one.”   – Satoshi Nakamoto

GoldCoin VS Other Cryptocurrencies

The Goldcoin Telegram Group is a great place to learn more about Goldcoin and participate in our growing community.
Visit Telegram