Just as GOLDCOIN (GLC) doubles in price to $0.34, one of the founders of Bitcoin.com admits management flaws for BTC, and shows why GOLDCOIN (GLC) will continue to attract users from other cryptocurrencies. 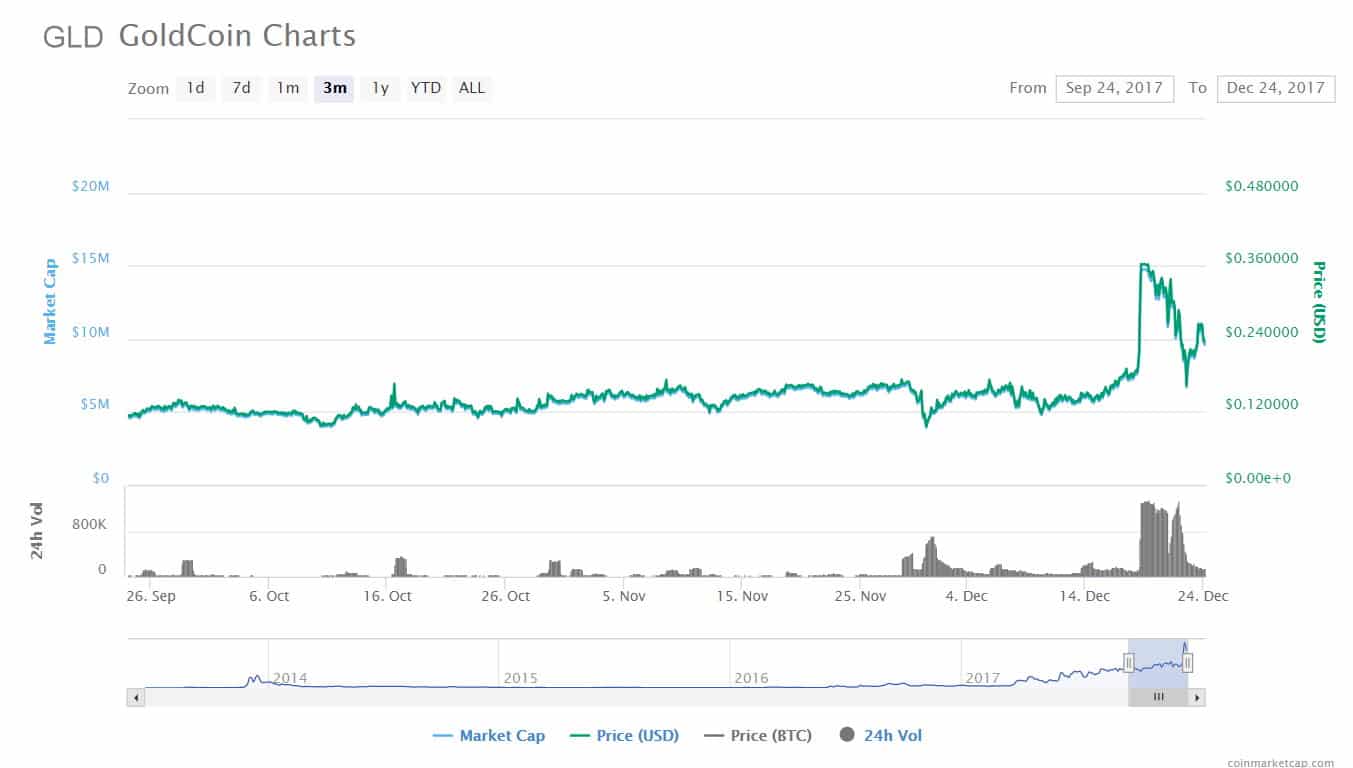 In an interview on Dec. 12 with the Swedish periodical BreakIt, Bitcoin.com founder Emil Oldenburg bitcoin’s transaction times, costs and lead times have undercut bitcoin’s value as an wealth builder. Oldenburg has reportedly sold all his Bitcoin and bought Bitcoin cash, but this has not been confirmed.

“The bitcoin network is unusable,” Oldenburg complained. “The problems occur when transactions are recorded on the blockchain. There is a limited number of transactions a person can make per second that relies on the block size that stores the transactions. This limit has made bitcoin an illiquid and unusable cryptocurrency,”

The number of bitcoins a person trades per second is limited, causing high transaction costs and lengthy transaction lead times. Traders are now crowding the market and making transactions costlier and slow, Oldenburgh said. “Bitcoin’s market liquidity is at stake.”

GOLDCOIN (GLC) addresses all these issues

GOLDCOIN (GLC), because it follows the path laid out by Satoshi Nakamoto when he invented the cryptocurrency concept in his original Bitcoin white paper of 2008, has addressed and resolved all the issues Oldenburg refers to.

“We are the only cryptocurrency to have preserved Nakamoto’s original plan for scaling the coin’s network,” comments GOLDCOIN (GLC) System Administrator Greg Matthews. “Our block creation time is 2 minutes, a fraction of what Bitcoin requires.“

And GOLDCOIN’s (GLC) network is now 10 times faster than that of Bitcoin, he notes.

“And we confirm transactions much more rapidly.”

As Oldenburgh explains, Bitcoin’s block size is capped – it is actually still at 1MB. Bitcoin management should have used on-chain scaling to increase the  block size, and thus the speed, of the network. Satoshi Nakamoto never intended for the blocksize to remain capped at 1MB.

GOLDCOIN  (GLC) can already scale much larger than that, with existing hardware for a fraction of the cost. It never really hits a scale ceiling.  The existing Visa credit card network processes over 20 million Internet purchases per day worldwide, but GOLDCOIN is much faster.

What’s more, GOLDCOIN (GLC) has undertaken a major upgrade of its network which will make it safer and better-performing, with three new skilled developers added to the staff.

The creation of an IOS wallet will soon make it easier for traders to place funds in the crypto-currency. An Android wallet is already popular.

And the GOLDCOIN (GLC) roadshow, which will kick off in the Spring 0f 2018 with a Conference Tour that will allow the team to showcase our technology and new software to the crypto-currency industry.

“This is why traders prefer GOLDCOIN (GLC) over  other cryptocurrency choices,” Matthews concludes.